It’s that time of year again, and our allergies are full force! Our eyes are greatly affected by pollen and other common allergens floating through the air. Sometimes it’s hard to determine if your suffering from allergies or symptoms of dry eye.

Is it Allergy or Dry Eye?

Here’s how to identify the two pathologies, even when they coexist and confound the diagnosis.

One of the most challenging issues we, as optometrists, deal with clinically is how to differentiate ocular allergy from dry eye disease. What makes this especially challenging is that, though superficially these two conditions seem like separate entities, they often coexist; and, in many cases, confound the diagnosis of each other. The presenting symptoms may closely overlap (see figure 1, page 38). Even more confusing is the idea that each of these conditions can independently lead to the other. Think of the old adage: Which came first, the chicken or the egg? That is, allergy sufferers may be on systemic, anti-histamine medication which leads to decreased tear production. Dry eye sufferers may have lacrimal plugs that cause antigens to stay on the ocular surface longer or insufficient tear production to reduce the antigen load, thus increasing the allergic response. This leads to difficulty in diagnosing the primary culprit and choosing the correct therapeutic strategy. 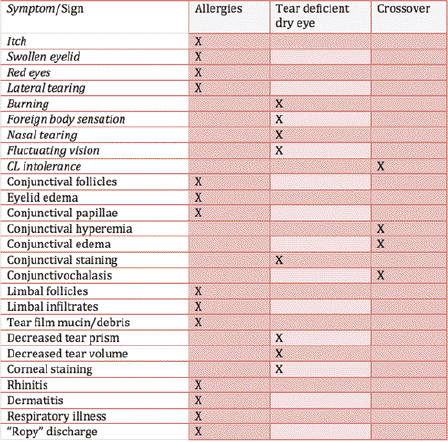 Figure 1 lists the common signs and symptoms of allergy and dry eye, including those symptoms that crossover and may apply to both pathologies.

In this article, we discuss both a symptom-based approach, as well as clinical differentiation.

The hallmark of an allergy is certainly the itch response, which is sometimes localized in the caruncle but is oftentimes described as a generalized sensation. However, other symptoms that commonly present with acute allergic response are puffy eyelids, red eyes and tearing (which is more prominent temporally). All these symptoms have a tendency to be exacerbated by antigen exposure and can also be manifested after a mild time delay from exposure. Patients may or may not suffer from seasonal allergies in the usual form of rhinitis or dermatitis though, making it potentially harder to detect from just the “obvious” symptoms.

Unlike allergic conjunctivitis, dry eye tends to be a disease that is more prevalent in symptoms than signs, especially in its earliest stages. In fact, in the earliest stages of dry eye disease, no signs are exhibited while more than one symptom may be present. Common symptoms of aqueous deficient dry eye disease often present as burning eye, foreign body sensation, nasal epiphora (secondary to reflex tearing) and fluctuating vision. Patients may also report increased redness of their eyes with dry eye disease. As mentioned earlier, however, many of the common symptoms overlap, so specific and detailed questioning is necessary to elucidate the true etiology. Typically careful clinical observation is also necessary.

In considering clinical observations for a diagnosis, ponder this: Allergic issues are typically confined to the bulbar and tarsal conjunctiva. Conjunctival follicles, papillae, hyperemia, bulbar conjunctivochalasis and edema are commonplace. In more acute cases, limbal follicles and limbal infiltrates may be present. Common eyelid findings include edema and hyperemia. Though the lacrimal system itself is rarely involved primarily, mucin filaments and debris may be found in the inferior tear prism. In cases in which oral or topical antihistamine therapy is already in place, the patient may suffer from a decreased tear prism secondary to the drying effects of the medications. Allergies may also have concomitant systemic manifestations including rhinitis, dermatitis and respiratory maladies. In addition, there is no lacrimal lake in ocular allergy.

Unlike allergic conjunctivitis, dry eye syndrome is not localized to the bulbar and tarsal conjunctiva, but typically has a greater effect on the cornea. Dry eye disease typically presents as only an ocular problem though obviously there may be many co-existing systemic issues, such as a multitude of medications, hormone changes and inflammatory or autoimmune diseases, that may exacerbate the condition.

In dry eye disease there is predominantly ocular surface staining present with a vital dye in either the nasal bulbar conjunctiva or cornea. Generalized hyperemia of the bulbar conjunctiva may be noted. There is typically a decreased lacrimal lake (opposite of allergies). Typically, papillae and follicles are absent from the tarsal conjunctiva.

The basis for treatment

Although dry eye and allergic conjunctivitis can overlap in symptomatology and clinical signs, their correct differentiation using both diagnostic approaches is key in developing a treatment strategy. OM